Yurie is the last student of Taner Nasf Secondary School 1 A 1 grade student, as soon as she finds herself a seat, she trips stumbling upon Jeff Spaike's extended leg, as Jeff deliberately schemed it, other students made fun of her, then Melissa Meiry called her names and slammed her head, causing her to hate it and growing a gap between Yurie and the rest of the classmates. Later, sitting out of boredom, Yurie hears Bruce Iyko screaming for help, only to find out that Melissa has been picking on him by stealing one of his cards, Yurie snatches the card and asks Melissa to leave him alone, ignoring her pleas, Melissa challenges her to a Duel with Jeff. Yurie winds up losing, and having "Hinn, Maiden of The Fiber VINE" torn into halves which causes her to break emotionally and burst into tears as the card she treasured, was destroyed. Yurie returns home and goes to her bedroom, sobbing at the sabotaged card that was given to her by her father, Hata calls her out for lunch, when Yurie couldn't hold her tears, she had to hide the fact that her treasured card was destroyed and simply saying she was bullied, Hata tries to support her overcoming her fears and insecurities, after finishing her dinner, Yurie noticed that the torn card is as good as new, despite not knowing how that happened she tested it and no errors existed. Later, Yurie meets Bruce in the schoolyard, after getting elbowed in her arm by Jeff, upon attending the noon's class, Bruce thanks Yurie, but as soon as they have a conversation, Melissa steps In and teases Yurie for her Duel and card loss, however, Yurie pulls "Hinn, Maiden of The Fiber VINE" and causes Melissa to doubt herself for a while, after protesting the card's legacy, Melissa leaves the classroom. While Yurie is sitting in the Public Garden grass, she hears Jeff Screaming only to find out that he got ambushed in a Duel by Melissa, she challenges her into a Duel. As soon as Melissa used few "Chaotic" cards, Yurie receives physical damage alongside Battle and Effect. Yurie tries to turn the table and manages to wipe Melissa's field using "Fiber VINE Tigeragon", however, as soon as Melissa draws and activates "Chaotic's Sphere of Darkness" Yurie becomes uncomfortable with the settings, even more baffled when the Mysterious life form tries to  manipulate her memories to have her tormented by the memories so they can outwit her, Melissa (Possessed by the Life Form) manages to force Yurie to send a card to the Graveyard, and dealing more battle damage using "Sphere of Darkness"' effect.Thinking that Yurie lost her entire LP, the life form declares their winning, until they look on the Dueling disk screen, noticing that Yurie has 50 LP left due to the effect of Yabadino Rock lilotha of Fiber VINE sent to the Graveyard by the effect of "Apoqliphort Towers". As Yurie draws "Harmonic Waves", she attempts to think of something to do with the card, then she gives up, midway her throwing the towel, her Duel Disk starts glowing from the Graveyard making her remember a promise she made with an old friend, as a result of that glow, an Evolute Monster called "Carole, Tigeragon Queen of Fiber VINE" appears in her Extra Deck, In the beginning, Yurie gets confused of how did a strange card appear suddenly in her Extra Deck, but she gets the gist of the Spirit . Determined to win, Yurie pulls a combo in which she summons "Carole, Tigeragon Queen of Fiber VINE" destroying all of Melissa's monsters, and dealing her a direct attack, resulting to her win.As Yurie attempts to tell Melissa that she was a fantastic duelist despite everything happened, only to get her hand slapped by the latter and receiving further insults from her, she falls on her knees, in state of confusion, thinking what she has done wrong to receive this turn of events,however, a bunch of Yurie's classmates and (other spectators) proceed to lift her up horraying her for being their "Savoir",  and Yurie is screaming to put her down, but no one listens to her. 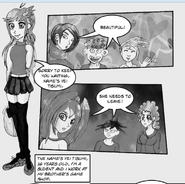 School Uniform
Add a photo to this gallery

Retrieved from "https://lionheartking.fandom.com/wiki/Yurie_Tisumi?oldid=188001"
Community content is available under CC-BY-SA unless otherwise noted.