Yei Tisumi ( يي شيسومي in Arabic; and Flora Fleuriste in French .Previously as "Barika",also nicknamed by Melissa "Little Yei" Nicknamed as "Yei Tsukumo" By YGOPRO percy Discord Server.) is the Main protagonist of Yu-Gi-Oh! Me, and the founder of Evolute Summon, who attends Taner Nasf Secondary School and is a resident of Birta City. She aims at enhancing her Dueling Skills, She also appears in the main Banners/icons of the manga (sometimes alongside Hinn). She is known to be a loner in the begining of the manga, then she started to gain respect and friends. She is a part-Time worker with her brother Hata Tisumi in the Game Shop.

Yei is a Tsundere character, she is an aggressive energetic duelist, but socially rejected despite of some of her qualities. she is often short-tempered, careless, she tends to call others names, especially those labeled as "wrong doers", including Melissa Meiry. In spite of their physical and social differences. the best example of that is calling Fokksu Taker "Pervert", this gag also implies that she actually doesn't know his name since they met until she turned him to the principal. Yei does not hesitate attack Melissa back, which leads her to being beaten or put in embarrassing situations by the Melissa. She often beats Bruce Iyko, or call him names which makes him shiver or get upset. She hates being told things people who can't do these things themselves. Her rivalry with Melissa appears when they first meet when she spots her dueling Jeff Spaike. Despite the careless characteristics Yei has, she cares about justice, becomes soft sometimes. She also believes that Dueling is for fun, and shows respect to her deck and monsters. In some situations, Yei gets instantly emotional, causing her to fall into depression,  mostly due to the

pressure of the outside around her, and the best example, is how she was teased by Fokkusu's Gang, and asked to surrender, despite that, she overcomes her emotions .She has no control over her emotions, as seen getting all enraged at Yuri because he has forgotten her, but she regains the control after being scolded by someone, especially in a duel.

A running Gag regrading her relationship with Fokkusu Taker, she dueled him to the end without even

knowing his name, she simply calls him "Pervert".

"Yei" in japanese means flourishing, which refers the physical and organic states of plants, which also is the base of her "Fiber VINE" Deck she uses. Tisumi actually made no sense, it randomly parodies the Last Name of Yuma Tsukumo's.

Yei is upset about surpassing her dueling limits. Whenever Bruce reminds her of her relationship with Melissa, she planned to Teach Melissa a lesson about  what Dueling really is. While dueling Melissa, Yei got into several pinch

es, Set up by a Posessed Melissa, performing a Shadow Game, Yei manages to defeat her discovering a Mysterious Power that has put an end to the Shadow game and free melissa from Chaotic Token.Instead of getting thanked after the end of the duel, Yei got scolded for "not being fair". Later, a Young man appears in the School who happens to be an agent for Keren Daichi to steal "Carole, Tigeragon Queen of Fiber VINE" from Yei, much to Yei's  disapproval of "put on a show for audience" she stuck to her decision not to hand the card to Fokkusu, She even tried hard in a duel to save the Evolute monster from Taker's hands. 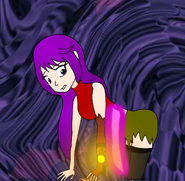 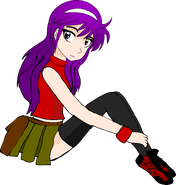 Yei with "Carole, Queen of Fiber VINE 2" and "Hinn, Maiden of The Fiber VINE" 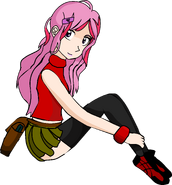 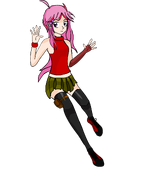 Fanart by Avvarette
Add a photo to this gallery
Retrieved from "https://lionheartking.fandom.com/wiki/Yurie_Tisumi?oldid=145603"
Community content is available under CC-BY-SA unless otherwise noted.