Umi Kraft is a character appearing in Yu-Gi-Oh! ME , she is a former friend of Melissa Meiry, it is implied that she has betrayed Melissa in some manner, and lost to her in front of the crowd to witness her punishment for betrayal.

Originally, Umi was planned to look pointy-chin headed ginger girl with extremely curly hair and extremely cartoonish wide eyes. From Stage 6 onwards, her appearance changed to having a normal face, short and blue hair with wavy bangs like the sea, and she wears the Taner Nasf's school uniform like most of the students.

Umi first and briefly appeared alongside Melissa and Jeff Spaike, they all shared the same "She needs to leave" line in reaction to Yurie Tisumi's first arrival to homeroom class she is in.

Later, she was seen dueling Melissa, trying to talk  her down to forgive her for betraying her and offers her to become friends again like they used to be, only to get refused and defeated by the latter and getting humiliated in the process.

The only card seen in Umi's deck was "Witchcrafter Schmietta", implies that she is using "Witchcrafter" deck. 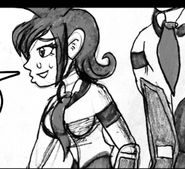 Umi with "Witchcrafter Schmietta"
Add a photo to this gallery

Retrieved from "https://lionheartking.fandom.com/wiki/Umi_Kraft?oldid=190352"
Community content is available under CC-BY-SA unless otherwise noted.