Ritual Monsters, colored blue, are Monsters that can only be Special Summoned with their corresponding Ritual Spell Card. Examples include "Black Luster Soldier", "Magician of Black Chaos", "Paladin of White Dragon", "Crab Turtle" and "The Masked Beast".

If a Ritual Monster was Ritual Summoned successfully and destroyed in any way, or removed from play, it may be Special Summoned by cards like "Monster Reborn" or "Return from the Different Dimension", unless it has restrictions that prevent it from being Special Summoned.

In a sense, Ritual Monsters are easier to summon than Normal or Effect Monsters of the same Level, since all you need is: 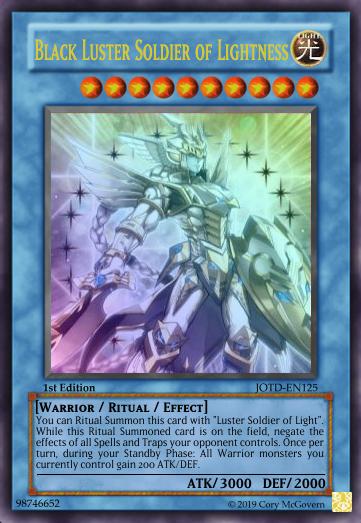 Retrieved from "https://lionheartking.fandom.com/wiki/Ritual_Monster?oldid=204785"
Community content is available under CC-BY-SA unless otherwise noted.