Chaotic Token has no current form, Since it's a shadow it takes any form/ shape.

Chaotic Tokens(s)' personalities are currently unknown, however from the persons they posess, they show a unique trait:

This Chaotic is known as a carefree entity, while it posesses someone, it shows their disturbing personality.

This chaotic has a cold personality, however, she becomes wild when she is triggered.

The male Chaotic Token came and posessed Melissa Meiry, during Melissa's duel vs Yei Tisumi, it gave her enough power to cause real physical pain to Yei for every damage she takes, however, when Melissa lost, it left Melissa's body.

The other female Chaotic Invaded Fokkusu's body when he has weakened his will towards the situation he and Yei were involved, unlike Melissa's posession, The posession gave him a cold personality, only to rage when being insulted by Yei. 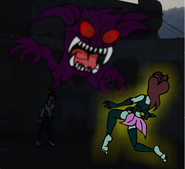 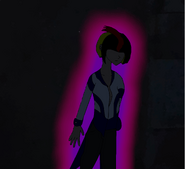 The female Chaotic Posessing Fokkusu.
Add a photo to this gallery

Retrieved from "https://lionheartking.fandom.com/wiki/Chaotic_Token_(Character)?oldid=192763"
Community content is available under CC-BY-SA unless otherwise noted.